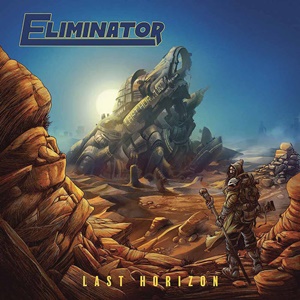 At one point containing former Skyclad guitarist Dave Pugh on vocals, Eliminator give hope to a British heavy metal scene clamoring for new blood to rival the NWOBHM veterans. Developing their sound over the past ten years through live shows, singles, EP and demo releases – we finally get to hear the first full-length effort from the quintet. What’s immediately intriguing about the group is their penchant for capturing the right atmosphere through catchy twin guitar harmonies and soul-stirring vocals, the type that encourage fire on the mountain unison singing as we forge on into the glorious battlefield of daily life.

That can mean the right gallop placement against charging riffs as the lower to mid-register melodies from latest singer Danny Foster push “2019” right to the forefront of current heavy metal anthems to treasure. It’s got the right Maiden-esque elements without becoming a caricature of itself, as the rhythm section work throughout possesses a mix of progressive rock and solid metal groove engagement – locking in to specific buildups and taking you on a journey song to song. The calmness through the verses of “Echoes” allows the harmony buildups and head banging to reach a fever pitch, Danny ascending to eagle high screams at times while still engaging the listener through a unique wizard-like delivery. Guitarists Matthew Thomas and Jack MacMichael also deserve credit for throwing down some blazing tradeoffs in the lead department during the surging energy kick for the instrumental transition of this arrangement. Eliminator succeed throughout because they save the musicianship inclined moments for appropriate times, and allow a solid hook to reign in as the vocals take center stage – cuts like “Procession of Witches” as well as the mid-tempo marching “Fall of the Seer” embody the spirit of heavy metal, causing legions to scream, shout, and flail fists high to the sky just as they did in the Heaven and Hell or The Number of the Beast eras.

At eight songs in a very reasonable 45 minutes, Last Horizon isn’t attempting to propel heavy metal into modern frontiers – the organic production and natural tones instead reminding the listener that the true spirit of the movement relies on great songwriting and performance mechanics. Because of this, Eliminator are a probable contender for newcomer/ best of lists worldwide and like Visigoth from the USA, proving that the young guns can contend with the old guard.