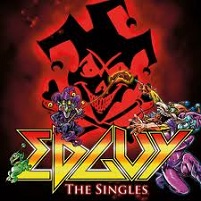 Always considered Tobbias Sammet and crew to be the likely successors to the Helloween “happy/goof” metal throne, especially after 2004’s excellent Hellfire Club, but as fate would have it, Edguy has gone down a more traditional rock route, so let’s hold off on those ‘Weenie comparisons for now. A dead giveaway for an album title, The Singles is a collection of the band’s singles and b-sides, all exposing Edguy’s lighter side (i.e. “Lavatory Love Machine”) and some cuts from their early power metal days.

are here: “Superheroes” (off 2006’s Rocket Ride), the aforementioned “Lavatory Love Machine” (Hellfire Club) and “King of Fools” (Hellfire Club). All certainly have their merits, notably the kiddy, Saturday-morning cartoon themed “Superheroes,” but the b-sides are what makes The Singles a worthy purchase.

Starting with “Spooks in the Attic,” a free-wheeling, saccharine number that has one Edguy’s patented gleeful choruses, and “Judas In the Opera,” which bears close ties to Sammet’s Avantasia project (probably because Avantasia regular Michael Kiske (ex-Helloween) lends his considerable vocal talents), are both top-notch power metal tunes. The band’s cover of Europe’s “I’ll Cry For You” isn’t exactly stirring, but demonstrates Edguy’s knack for fitting right in the crevice between trad power metal and 80’s cock-rock.

Rounding out the compilation are a cover Magnum’s “The Spirit,” an “epic” version of “Superheroes,” an acoustic edition of “Lavatory Love Machine,” andHellfire Club leftovers “New Age Messiah,” “The Savage Union” and “Holy Water.”

Totally necessary if one is still aboard the Edguy bandwagon (this scribe is still on) and even if not, one has to recognize the tireless work ethic of Sammet, who in a year’s span has managed to front two high-priority, high-visibilitybands

with little or no dip in quality. Maybe he’s a superhero? Wow, that was weak…