Edguy – The Age of the Joker (Nuclear Blast Records) 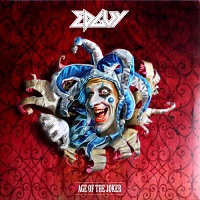 Now well past their full-on power metal phase, Edguy seem to have settled in nicely into their role as resident, rocking funnymen. The constant double-bass churn and overblown choruses of their yesteryear have been replaced by edgier, less metal-sounding songs

, but the pervasive tongue-in-cheek vibe is still there, which is probably why The Age of the Joker is still a success across the board.

Fresh off his stint with Avantasia, singer/primary songwriter

Tobias Sammet must have relished the role of not having to write to a set concept (Avantasia is totally conceptual), so there’s plenty of variation between the album’s 13 tracks. Lead single “Robin Hood” (yes, THAT Robin Hood) is about a fun of a song as the band has written, right up there with “Lavatory Love Machine” and “Superheroes.” The accompanying video is even more of a hoot, with the Germans dressed in tights, frolicking through the woodlands.

Beyond that, it’s hard to not get behind the free-flowing “Nobody’s Hero” (which contains the best chorus on the album) as well as the hard rock swagger of “Two Out of Seven,” where Sammet lets his raunchy side out to comedic effect. The lengthy “Behind the Gates To Midnight World” and closing ballad “Every Night Without You” are both exercises in Edguy’s now unique brand of songwriting etiquette.

Not quite at older-statesmen level, Edguy are unique as they are easy to get into. There’s not a trace of silly power metal bravado here, nor any pretense under which the listener is supposed to easily identify some type of self-serving “epic” angle. Rather, the Germans are a bunch of goofballs on The Age of the Joker, and to top it all off, they’re damn good at what they do.