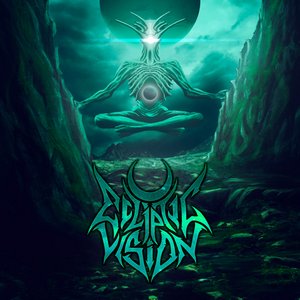 Coming back for a second full-length helping is Syracuse, New York-based Ecliptic Vision, following up on 2016’s Dissimilar Dimensions (they did also put out an EP the following year). What really stood out on first notice before hearing the music was the shade of green on the cover and the dark, sci-fi feel to it all. While the music doesn’t exactly carry over that unique tone, it’s some solidly-written groovy death metal.

Ecliptic Vision sets brutality at the forefront of their arsenal. Massive grooves and aggression are never in short supply (no doubt enhanced by the in-your-face growls), but the band also doesn’t limit themselves to just doling out destruction. The grooves have some melodies packed into them (see “Crux of Infliction”) and the switch ups between these and more go-for-the-throat moments offer a keen sense of balance. A bit of quasi-technical (read: tasteful, with nothing too over the top) material also helps to keep the music interesting. It’s almost like a bit of Suffocation style attack with some Soreption-level grooviness. There are three ‘mood-setting’ snippets (intro/around the middle/outro) that don’t really hit the marks, but are easily skippable – the band fares far better when they naturally insert these into the songs, such as “Alientity” or “Fear the Horizon” instead.

Well-rounded suits Ecliptic Vision best in regards to what the band is going for. The mix of groovy, vicious, and some technical/progressive inserts is done with respect to the songwriting and makes for a heavy and enjoyable listen. It checks off all of the extreme metal boxes, and while it doesn’t reach too far beyond that, many should find it to be worth checking out, particularly for the groove-driven amongst us.