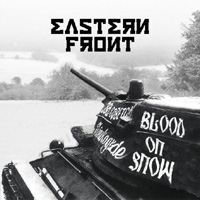 Thanks to the success of Hail of Bullets and ongoing lyrical dalliances from God Dethroned, war-related themes are getting quite the workout. It’s nothing new – just about every self-respecting metal band with an iota of a clue has at least broached the subject, but bands are now fully immersing themselves in such themes, with English black metallers Eastern Front being the latest entrant into metal’s war games.

Blood On Snow is the band’s debut effort, with a suitably prominent array of black metal elements coming to meet death metal at the pass. The band’s sound is primarily rooted in the pace-quickening template laid down by Marduk (who also used to dabble in war themes), as well as the grueling chord tactics now employed by Germany’s Endstille. Those bone-rattling moments the aforementioned bands can occasional conjure up aren’t exactly prevalent here, save for the chugs on the title track and the head-snapped “Unleash the Panzer Division.”

In search of that climatic moment, Blood On Snow does pop out “Motherland,” an acoustic-led number that ultimately evolves into a power surge of Enslaved circa-1997 movements. It’s easily the album’s best song, with “The Gates of Moscow” kicking up a similar storm with some cool stop-start dynamics and triumphant melodies.

Quite indicative of how ineffective black/death metal can be, Blood On Snow is as unremarkable as its lyrical compass would suggest. Given Eastern Front’s relatively new status on the scene, it’s not all doom and gloom, but in comparison to the band’s who really know how to use war and its endless stream of stories, Blood On Snow is a few brigades short of a full army.