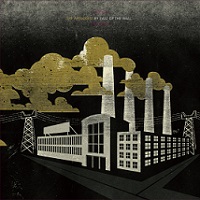 Running the power sweep right through progressive metal’s tonal and gentle underbelly, East of the Wall are essentially how post-metal would sound if the style’s bands

had more of a musical pedigree. On their third effort The Apologist, the band finds even footing through the spacey and oftentimes elaborate compositions, essentially picking and pulling from their disparate influences. So, at times The Apologist is ready for take-off; other times it gets stuck on the runway because there’s so bogging it down from greatness.

At 12 songs, there’s quite a bit to digest here, as EOTW like to take nice instrumental strolls through the various compositions here. Usually, the band hits the ground running with dual vocal interplay (i.e. gruffs and soaringcleans

), then peels off into proggy jam bits, either of which take on the atmospheric tone of modern day post-metal (Pelican, Rosetta, etc.), or are technically-inclined ala Scale the Summit, minus the guitar theatrics. To the credit, EOTW knows at exactly the right times to hit the throttle, as heard on “Linear Failure” and “Running Tab of Sweetness.”

On the flip-side, the band has packed so much into The Apologist’s running order that finding that the hallmark moment is not going to happen. Not to say the bright “Naif,” or grooving “Horseback Riding

In A Bicycle” (love the opening riff) don’t have any merit to them, they’re just at the tip of total resonance. Perhaps a slender LP next time out will do these lads some good.

The freelance approach East of the Wall takes on The Apologist is the ideal platform for their musical chops, so it’s basically right in between the musical frenzy heard by the likes of the aforementioned Scale the Summit or Long Distance Calling, two pure-instrumental acts. However, one could easily

vouch for The Apologist since you know, this is an age of excess. The more the merrier, right?