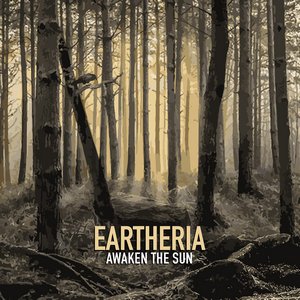 Atmosphere and melody in death metal can be a wonderful thing. There’s a sincerity that’s found with the heavier end of the extreme metal spectrum, and finding an equally genuine way of introducing more elements than simply pushing aggression is pleasantly on the rise (which doesn’t necessarily mean plunking in clean vocals from time to time). Finland’s Eartheria, for which Awaken the Sun is only their second output, have seemingly already found a way for this to work in their favor.

Awaken the Sun is thoroughly death metal, no doubts about it. Some helpings of other extreme elements like thrash and prog may sweeten the pot a little bit, the band swings generously with a technical incline to their playing that modern death metal fans will no doubt appreciate. But it’s always implemented tastefully, in part because there is a feeling of atmosphere and emotion to it. Flowing, melodeath-inspired moments like in “Nihil” and “A Wake (in the Sun)” take the band towards Allegaeon-ish territory, with them being able to introduce some real rumbling riffage as an effective counter. When they double-down on the melody or dive into some leads, there’s a feeling of more introspection and occasional melancholy. The dynamic works well and gives the music a deeper and more rich flavor to it, effectively lending more credence to the heavier material at the same time. The heaviness is always there, but their ability to channel it into modes other than straight-forward aggression and attitude is something that feels far beyond their years.

Awaken the Sun is an intriguing work from Eartheria, and one that forebodes an even stronger presence as they continue onward. Melody, atmosphere, aggression, and progressive rhythms all play their part in something that ends up sounding far stronger than the mere sum of its parts.