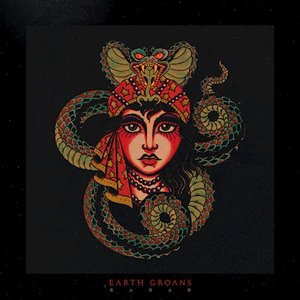 There was a bit of hesitation in seeing a release like Rahab roll through the promo emails. A metallic hardcore (read: metalcore) act on Solid State Records instantly drew some flashbacks to some lesser known acts in the previous decade that felt more generic and tedious in tone. Thankfully, Earth Groans subverts all of those notions and brings forth five cuts that are built on metallic hardcore but not overly reliant upon cliché.

The most striking first impression of Rahab is just how heavy it is. With a short runtime, it goes straight for the throat and never lets go. The guitar riffs are chunky and driving ahead, allowing for those inevitable breakdowns to come in with more impact than one might want to give credit for. Without the obvious focal point of a breakdown, the songs are more balanced, be it the downwards spiraling of riffs in “Allure,” strong gallop of “Reign,” or hearty groove of “Avarice,” the riffing is more than mere dressing for some throttling breakdowns. Caustic hardcore barks are a perfect accompaniment to the musical chaos surrounding them, making sure that the end result is something decidedly brutal in tone. All of this done with some lyrical content that veers in a more positive direction about facing our giants. If there’s one slight drawback, the near-constant barrage of heaviness does still seem to weigh the album down at points, and makes some moments seem more noisy than an act like this tends to strive for (though some will love the band all the more for this).

Earth Groans dole out plenty of aggressive riffing across the whole of Rahab. It may be a bit one-dimensional for some in that regard, but there’s little doubt that the band carries with them plenty of energy and willpower.