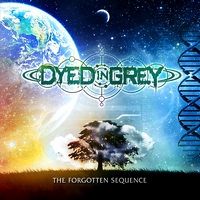 Some bands make it exceedingly difficult for writers to nail their sound into a few choice snippets, and this is a good thing. What’s the point if one is simply able to say, “oh, it’s genre X” anyway right? Traditional genre tropes have caused bands to start thinking outside of the box, and recently it appears something is in the waters in Brooklyn. As with the recently reviewed Fin’Amor, Dyed in Grey do a great job of combining traditional elements into something that defies convention.

There are plenty of pieces that one can pick out with The Forgotten Sequence, Dyed in Grey’s second release. Overall, the band presents itself as a modern and progressive act but there’s more than what presents itself on the surface. There are progressive (and technical) touches, modern metal, traditional and NWOBHM, melodic death metal, and more to be found as you continue to listen. But to avoid a lengthy dissection, it’s safe to say that if you like aggressive and catchy hooks, equally melodic and soaring vocal choruses, and a modern crunch, The Forgotten Sequence will easily satisfy. Standout cut “Veil of Oblivion” seems to serve well as the band’s mission statement. Intriguing and playful riffs intertwine with some deathly roars, only to open things up to the album’s most addictive and melodically hooky chorus. The contrast between heavy and melodic is covered quite well, with the band feeling beyond their years on cuts like “The Absonite Path,” that energetically switch back-and-forth between contrasts without missing a step.

With clear jumps from their debut, Dyed in Grey seems poised to make their mark upon the scene. Those looking for a melodic edge to their metal would do well to check out The Forgotten Sequence, as would those with a yearning for progressive (yet not overdone) tones. There’s a delicate balance here, that never tips too far in one direction – yet it does right by (and satisfies) all the parties involved.