Dream Child – Until Death Do We Meet Again (Frontiers) 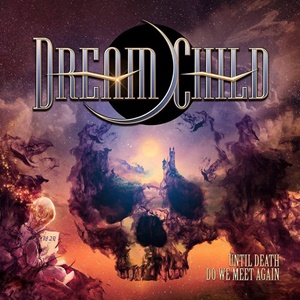 When a record label president asks you to rise to a challenge, musicians often accept. That’s the case for guitarist Craig Goldy – best known in the metal world for his time in Dio, where releases like Dream Evil, Magica, and Master of the Moon marked his territory. Inspiration flows again after coming to terms with Ronnie’s passing, feeling the need to create a new band in the spirit of his Deep Purple/ Rainbow upbringing for influences. Welcome to Dream Child – featuring bassist Rudy Sarzo and drummer Simon Wright who Craig has worked with in the past with Dio, guitarist/keyboardist Wayne Findlay of MSG fame, and Helker singer Diego Valdez, whom Craig learned about through a tribute song Diego did of Dio’s years previous.

Until Death Do We Meet Again may be a debut album, but it certainly has that atmosphere of veteran musicians who know their craft, develop their own niche in this style, and execute at the highest capacity possible. Wayne and Craig lay down serious bluesy chops against the heavy tones through dramatic, tension-filled textures- as “You Can’t Take Me Down” and “Playing with Fire” illustrate, the former possessing old school Whitesnake charm while the latter sits in Dio-era Rainbow glory. Diego captures the resonance and passion for Ronnie James Dio throughout – magical during a doomier arrangement like “Light of the Dark” while soaring to the heavens during “Games of Shadows”, a special voice that brings home those melodies in a beautiful, respectful way. You can close your eyes and feel the groove and emotive lead break for “Midnight Song” take you back to Long Live Rock and Roll period Rainbow, while the music box and narrative nuances bring the epic title track more fairy tale charm to a wedding vow twist on the title, how we meet in death on the other side. Next time around, one hopes a little more time can be spent in the final production aspects – as there are times where you wish for a fuller/thicker sonic punch, but it doesn’t deflect from the stellar musical/vocal hooks and balanced approach in front to back songwriting.

They don’t make bands like Dream Child anymore – ones that keep the spirit of 70’s Deep Purple/ Rainbow alive, infusing playful musicianship chemistry with solid mechanics and memorable songs. Let’s hope this is the start of a long, fruitful career.