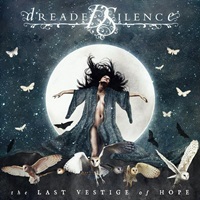 Fortunate to grow up in a fairly active and diverse New England metal scene, there are numerous musicians this scribe has crossed paths with and kept up on through the years. Boston, MA quintet Dreaded Silence have been active since 1998 – releasing four EP’s in the last 9 years including an acoustic outing Hourglass for 2013, but only recently coming onto my radar screen due to ex-The Accursed drummer Chris Helme’s involvement with the group. Better late than never to the party, right? In the case of their first full-length, a title like The Last Vestige of Hope prepares listeners for a mood altering experience in a melodic progressive/doom platform that embeds itself deep for multi-sensory enlightenment.

The twin guitar lineup of Scott Green and Mike Orfice fills these 13 tracks out through a treasure trove of clean and electric riffs segmentation – offering up complementary back and forth elements to make the open, Porcupine Tree-like “Vessel” an early favorite as the leads weave in and out of the verses while the rhythms build in dramatic tension. The follow up “Negative Space” showcases more of their heavier Opeth leanings, even in sparse transitions where there are death growls against progressive doom movements. Three shorter interludes provide brief respite for the next aural salvos (the guitar harmony led “A Letter I’ll Never Send” the best), as the churning mid-tempo “Fledging” proves that the long-lost Sentenced meets Katatonia atmosphere can be quite intoxicating and hypnotic, with vocalist Ken Gillis keeping his melodies very morose and serene, another alluring facet that increases interest through successive playbacks.

Bassist Dana Chisholm and the aforementioned Chris Helme are a formidable rhythm section, able to shift from straight-forward tempos and slightly more challenging, progressive sections at the drop of a hat – “Portrait of a Past Life” thrusting and volleying between both during it’s 6:40 timeframe, while the calmer “I Await the Waves” has a classic, almost 90’s alternative Live vibe where less is indeed more. In a progressive, melodic doom product, the beauty lies in continual discovery – what may not appear to be important becomes magnified a few sessions in, and Dreaded Silence is one of those bands that are intent on developing addictive hooks, riffs, and catchy melodies.

Throwing a lot of names around (put Lake of Tears in the mix too), The Last Vestige of Hope gives Dreaded Silence a potent product to be proud of, hopefully extending their following from New England to the world.