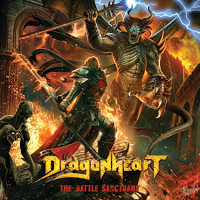 Dragonforce, Dragonlord…Dragonheart. Makes sense. Slayer was wise enough to drop “Dragon” from their initial moniker of “Dragon Slayer” for such obvious Dungeons and Dragons reasons, knowingly leaving the fantasy realm to bands who would willingly pick up on it without second thought. Brazil’s Dragonheart happen to be one of those bands, having got their start in 1997, effectively hanging out unnoticed in a melodic metal scene that would go on to produce very few legitimate bands outside of Angra and Hibria. The Battle Sanctuary (their fifth album) appears to be a comeback of sorts, it being the band’s first proper studio album since 2005’s Vengeance in Black.

As the rating suggests, The Battle Sanctuary is flawed across the board, bogged down by every know power metal cliché that has been available since the mid-80s. The dual vocal attack of Mauricio Taborda and Andre Mendes is almost like Grave Digger gray throat Chris Boltendahl and Hammerfall siren Joachim Cains were bastardized and dropped into a new band. Taborda and Mendes regularly trade vocal lines – a rare occurrence in power metal – one tackling the highs, the other providing the guttural lunges Boltendahl has magically made a career out of it. Some of these choruses have lift, like “Inside the Enemy’s Mind” and closing number “Time Will Tell.” On the flip-side, the heard-it-all-before nature of these songs undercut the band’s quality musicianship and adherence to every power metal norm in the book.

One really needs to disregard any predisposed slant when taking a band like Dragonheart on. Power metal, unfortunately, has been riddled with bands who present everything its naysayers believe about the subgenre. Dragonheart follows such guidelines to a T, resulting in very much a forgettable listen, if not for the idea of imagining the real-life Boltendahl and Cains teaming up. Who knows if that would even work…