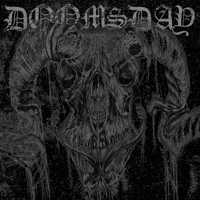 Side projects are supposed to sound like side projects, you know? It’s counterproductive to form another band that sounds like your main band; it’s like the old adage regarding the dude frying hamburgers at McDonald’s coming home…to eat more hamburgers. ‘Tis a bummer when this happens (not the hamburger part; they are delicious, minus pickles), for the gentlemen that comprise of Doomsday have put in some serious man hours in formidable acts like Nachtmystium, The Gates of Slumber, Goatwhore, and more. Doomsday should be a sonic detour, but it’s essentially a congealed idea of the above-mentioned bands.

Minus bassist Bob Fouts, everyone in Doomsday had done time in Nachtmystium, which possibly speaks to Blake Judd’s band management abilities. Nevertheless (and that’s not really the point here), drummer Zak Simmons is his usual rock-solid self, while vocalist Zion Meagher (Anti-Human Thesis, ex-Forest of Impaled) is suitably beastly sounding. The quintet rolls out a blackened crust sound that is not terribly dissimilar to the likes of Black Anvil and Wolvhammer, with a few bulls-eye early Celtic Frost nods, like on “Black Judas.” The black metal-on-punk of “Bring Down the Knife” is passable; so is the crossover-inspired “I Kill Everything I Fuck,” but neither are more than average extreme metal.

It would be interesting to hear what the members of Doomsday could really do if they thought outside of the constrictive black-crust-death box. There’s zero sign of that here, of course, which in turn, renders this side project as rather unmemorable.