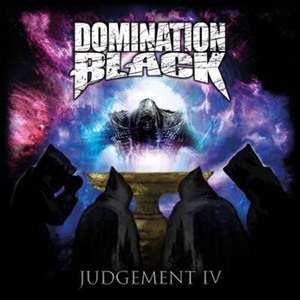 Finnish act Domination Black have had periods of activity and long bouts of inactivity in their seventeen- year existence as a group. Releasing two albums between 2005-06 on Poison Arrow Records, they would lose their vocalist in 2009, gaining current singer Matias Palm a year later. Their third album Dimension:Death hit the streets in 2012 – and since then, more member changes caused a bit of a delay in this current fourth full-length Judgement IV not coming out until now. The six-piece deliver a sound that contains equal elements from the symphonic, power and gothic metal camps, ensuring at the very least a diverse style as you partake in these ten tracks.

Because of the expanded lineup, Domination Black take advantage of setting up their sound with many earworms and melodic/harmonic situations where you can have a mix of clean/electric guitars and layers of keyboard / orchestration maneuvers for dynamic contrasts. Check out for instance the swirls of lush keyboards from Juuso Elminen against the acoustic strumming that builds into some crunchy, down-tuned rhythms for the 7-minute plus “Beyond the Shadows” – the atmosphere and tension elements that allow Matias to reach some sinister Halford-esque screams midway through pure gold. At other times the guitars glide in power mold against some airy/dance-like synth parts, the rhythm section hammering home some straightforward metal grooves as “The Judgement” delivers for a strong opener. The guitar play of Teppo Heiskanen and Juuso Laitinen has some thrash and shred bite at times, making “This Endless Fall” adventurous while sitting in a nice Accept/Judas Priest-like pocket for the supremely catchy “Empire of Lunacy”. For the most part the main sneering stance of Matias vocally carries forth a bit more Graham Bonnet nature, which could be hit or miss from some consumers but then he’ll surprise listeners by leveling up to another gear for his metal to the bone screams.

Judgement IV has appeal to a wide array of listeners, as the band can be melodic and progressive a la Mob Rules, but then very much in the power mold when they want to execute some Labyrinth or Stratovarius sides of their sound. Tack on the classic heavy metal filter that peaks in from time to time, and it’s easy to understand how Domination Black could be another Finnish hidden gem if you like solid songwriting and proper execution on all fronts.