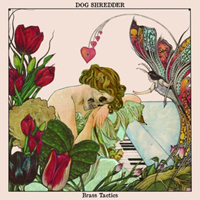 Big ‘ole minus points for the name, a moniker only a pre-incarceration Michael Vick would be down with. Nevertheless, Dog Shredder is a power trio from Portland, Oregon, purveying a brand of messy punk and hardcore, with splices of power violence and progressive metal added to the mix. And even if they had a halfway decent name (how about Cheese Grinder?), Dog Shredder has ways to go before they can join the punk/hardcore rank and file.

Brass Tactics comprises of three songs, each of which has the word “battle” in them, starting with opener “Battle Toads,” the name of a Nintendo game from the early 90’s that this scribe’s older brother was unable to beat, even in his game-playing heyday. The song itself moves in and out of numerous time signatures, creating an uneven and uneasy feel to the proceedings, while “Battle Snake” comes across as the most refined song of the bunch, reveling in some brutish and meaty riffs. The EP’s closing track “Battle 07” takes on a doom angle that meshes well with the inclusion of an organ.

Brass Tactics is whacked-out EP from a whacked-out band. Dog Shredder comes across as a band best-suited for the Rotten Records roster, who seem to snag irreverent and snotty bands like this. Their name might not do them any favors (it’s okay to shred humans, but not dogs, it seems), yet Brass Tactics should help launch the band into very niche oddball punk/hardcore scene they’re looking to get into.