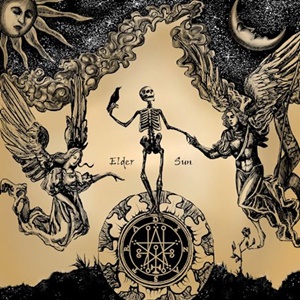 Combining a love of thrash and black metal, Montreal act Dizastra came to fruition in 2014, their namesake derived from Middle French and Old Italian words that mean ‘bad star’ for which ancient civilizations felt the end or misfortunes would be occurring. Releasing their first EP Hell’s Gate a year later, they gained a new rhythm section in 2017 which brings us up to speed for this full-length effort Elder Sun. It’s evident throughout these nine songs that the band infiltrate their attack with a proper sense of catchiness and groove elements, while never relenting the blackened screams and tones to their crushing thrash base.

Much like current Skeletonwitch, there’s a raw edge permeating the atmosphere, along with an affinity for many classic bands when it comes to phrasing and evil textures – the blasting/tremolo-driven combinations during “Dead ov Night” along with the mid-tempo groove sections well done in terms of flow, as well as the combined vocal/gang background activities that often set up call and response proclamations. Guitarists Denis Stoisin and Matteo Conti serve up brilliant riff foundations and fluid solos that provide another melodic element amidst the intricate arpeggio breaks – digging into some early 90’s Kreator/Megadeth-like sophistication through brutality in the slower sections of “The Second Coming” that bring slower fist pumping and swaying to mind during its seven-minute plus arrangement. Dizastra love Watain and Dissection as much as older Venom and Bathory – you can tell through the screams and bellows of Matteo, the pounding nature of drummer Pietro Giampa, and the darker/epic tones during tracks like “The Last Stand” and forceful opener “Vae Victus” that the quartet possess the best traits of black metal and thrash without sacrificing integrity on both fronts.

Because of the longer nature to certain songs, Elder Sun probably has broader appeal for those who prefer versatility and intricacy against the normal hooks, grooves, and melodic moments. But it’s a rewarding experience as Dizastra is another gem in the Canadian metal scene that shouldn’t stay underground or unnoticed for much longer.