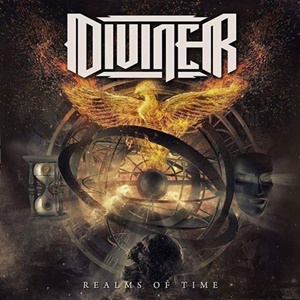 Reuniting members of InnerWish at various stages of that Greek band’s career, early vocalist Yiannis Papanikolaou along with current drummer Fragiskos Samoilis became part of Diviner – a newer power/heavy metal group determined to incorporate heavier, deep and darker measures to their melodic sound. The second album Realms of Time appears four years after their Fallen Empires debut, Kostas Fitos replacing guitarist Thimios Krikos in the interim due to a heavy/conflicting schedule. This record contains a potent mixture of North American heaviness that borders on thrash intensity, while displaying the proper European sophistication and knack for all the right hook lines to capture the attention of a wider swath of metalheads.

The down picking, crunchy / triplet nature to the twin rhythms and supplementary refrains that Fitos and fellow guitarist George Maroulees inject within “Set Me Free” invites comparisons to Iced Earth and Rage, while the heads down anthem action for “Against the Grain” draws from Primal Fear and Painkiller-era Judas Priest. These musicians waste no time getting down to business, the heavier/low gallop penetrating “Cast Down in Fire”, allowing Fragiskos to flex his dexterity and groove-oriented drum combinations in versatile and entertaining ways. Yiannis as a singer has that killer ability to portray anger and intensity while still being commanding and mindful of memorable phrasing/choruses – Ronnie James Dio and Russell Allen spring to mind as you listen to a wonderful headbanger such as “Beyond the Border” and a moody, semi-acoustic/electric closer “Stargate” to understand his soulful, magical range. Diviner prove throughout the record that using dynamic tones as well as taking a modern production philosophy pays off well in the end – a great balance between solid power/heavy metal songs and using the tools of today to make things sound like it’s 2019 – not twenty or thirty years previous.

Philosophy, allegory, introspection, and thoughts relating to heaven and hell permeate the Diviner lyrical outlook – but not in a preachy manner. Considering the pedigree of power/heavy metal in Greece during the 1980’s and beyond, Diviner rank well on their way to attain a bigger, sustainable following based on this outstanding, addictive release.