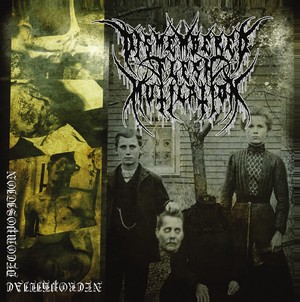 Explosive goregrind has been something that has always been bubbling below the surface in the extreme metal underground. Repulsive and disgusting lyrics and/or cover art, blastbeats until your ears bleed, inhuman vocals, and blurringly frantic riffs. All of these things go hand in hand with Dismembered Flesh Mutilation. They do everything you expect from the genre, for better or worse.

Admittedly, this sort of release is a very niche thing, and there will likely be some that absolutely praise Dismembered Flesh Mutilation’s take on putrid goregrind if you are the type to dig through the Bandcamp underground to find the latest in this style. It’s absolutely frantic, as described above, to the point where to be 100% honest, you really won’t tell much of a difference between the tracks other than their gross-out names (such as “Ulcerated Vagina Filled with Maggots“ or “Anorectic Breast Barbecue,” I think you can sense a pattern). The band covers a Mortician track, “Zombie Apocalypse,” which does stand out a tad due to the slower pacing, but outside of that and the questionably long outro, it’s mostly just a grinding death fest. The vocals are varied in their execution for what it’s worth – a blend of monstrous gurgles, roars, and rasps that never approach being intelligible but are vitriolic in their tone.

There are loads of this sort of heinously brutal bands out there within the wasteland, and while Dismembered Flesh Mutilation lack the overly processed (and drum machine-laden) feel of many of their contemporaries, it’s still the same ole chaotic mess. Only the sickest need apply for this one.