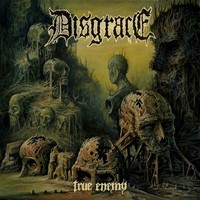 Death metal-infused hardcore you say? Seems destined to failure, capable of upsetting one or both parties involved, but Disgrace are anything but disappointing with their particular set-up on True Enemy. Somehow equally stepped in both metal and hardcore, Disgrace offer up a severe pummeling for any who chose to sink their teeth into this one.

As mentioned, Disgrace manage to satisfy the needs of both fans of metal and hardcore. They take the straight-up death metal approach of a band like Bolt Thrower, a slight buzzsaw crunch to the guitars (a la just about every retro death metal band going), and even a little bit of old school Sepultura to their metallic side. An interesting conglomerate all on its own, but then there is a bouncy, groovy hardcore edge to the proceedings. It gives True Enemy a more in-your-face, biting feel to it that the chugs of “1000 Voices” or the snarling breakdown of “Slave to the Lead God” greatly benefit from. The songs get right to the point as well, with much of the album’s tracks hitting below the three minute mark. But nothing wrong with a little get in, get out action as long as the band has the furious chops to back it up. Disgrace definitely qualifies for that designation.

While the tracks may suffer from a mild case of deja-vu as you get towards the end of True Enemy, the scathing nature of the album will keep you coming back for more. An interesting debut that should please quite a chunk of the extreme music spectrum. Plus, that Dan Seagrave cover is absolutely killer.