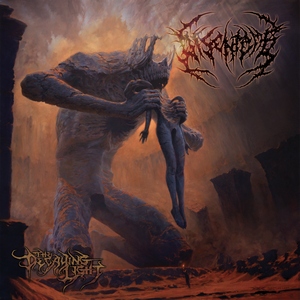 It’s beginning to feel like 2019 is the year that slam-based bands are deciding to jump outside the usual boundaries. Ingested has been slowly injecting more straight death metal into their mix, Vulvodynia recently unleashed a slurry of influences on their latest, and now it seems time for Disentomb to try their hand at evolution. The Decaying Light can still bring the slams, but it’s got much more personality than you might think.

It’s been 5 years since Misery was released, and The Decaying Light appears to tip some hats in the direction of the growing atmospheric portion of the death metal community. The first track, “Collapsing Skies,” shows the type of promise that the album does deliver on (check out “The Great Abandonment” or “Dismal Liturgies” later in the album), with slower and almost doomy riffs pulling the band into dreary waters that feel more emotive than bludgeoning. While the follow-up track, “Your Prayers Echo into Nothingness,” does move into more traditional, brutal territory, there’s more of a songwriting technique behind it all. The more battering ram-esque moments are deliberately placed and are given room to grow and build up into a mood of darkness and despair. There’s a real sense of bleakness to the entire record, something that most slam-driven and brutal bands can’t really capture to this extent and it really adds to the sense of foreboding when the band slows down (“Centuries of Deluge”), and the sense of exhilaration when they decide to go full-tilt (“Dredged into Existence”).

There’s a real sense of growth on The Decaying Light. Disentomb haven’t abandoned the carnage-driven feel of their previous work, but instead harnessed it into some new and exciting directions. It sets them in a different path from many of their peers – a brutal and dark atmosphere of horror that yearns to pull listeners into despair.