Dinner Music for the Gods – Beautiful and Treacherous (Self-Released) 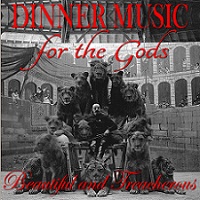 The “kids” may not find a great deal of value with a band like Las Vegas’ Dinner Music for the Gods, yet progressive old-timers, still mingling about the Dream Theater-Rush-Yes courtyard should something of instant worth via the band’s Beautiful and Treacherous debut full-length. Boasting a smooth, steely compound of flavorful playing, serene melodies, and ample dexterity, the band’s all-instrumental approach shoves its way into the prog-metal discussion, essentially tailor-made for the subset found via InsideOut, Nightmare, and Sensory Music labels. Basically, it’s un-hip, but totally engaging prog-instrumental metal.

The band’s fusion blend, where jazz, classic rock, and technical metal meet in the middle, is headed up by playing of Darrin Pappa and Andy Heilman, both of whom meld the sometimes exotic play of Angra, with the progressive pedigree of Dream Theater offshoot Liquid Tension Experiment. Since the band’s tunes are devoid of vocals, there’s plenty of room for the duo to freelance, as heard on the excellent “Winterfell,” and “The Tower.” When combined with a well-stocked melodic blockade and the necessary amount of restraint and technical composure, there’s some real snap to tunes like “Queensland” and “Ghost Troopers in the Sky,” which hauls in Maiden’s timeless opening riff sequence to “The Trooper.”

Covering Led Zeppelin’s “Kashmir” could prove to be the necessary breakout angle for Dinner Music for the Gods. It’s about as worthy of a rendition as you’ll hear of a classic rock song, with the band going as far as to convert Robert Plant’s vocal lines into guitar melodies. Alas, this is just tip of the iceberg stuff for a band with a quirky name, but with the prowess to quickly become one of metal’s more interesting instrumental outfits.