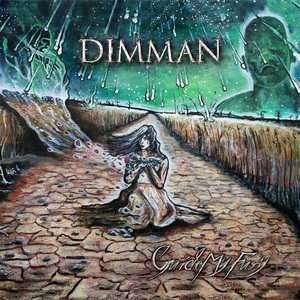 More Finnish melodic death metal? This scribe feels he can speak for most of DR with a reply of “Yes, please!” That being said, not just any old thrown together effort will do. Fresh upstarts Dimman are the next band up to hit the speakers, with their second EP, and first for Inverse Records. Guide My Fury provides a short but sweet introduction, laying the groundwork for things to come.

Dimman aren’t really playing anything that sits outside the usual boxes, particularly for Finnish-based melodeath. Of the boxes that you can check off the list when Guide My Fury plays include gloomy yet catchy riffs, atmospheric synths, rather upfront growls that go for the emotive touch rather than feral aggression, and a couple blastbeats and clean vocals to tie it all together. But they do have a strong grasp on how to implement the usual tropes, and can craft some moving melodies along the way. They also blend in some more modern progressive elements along the way, which isn’t entirely outside the norm, but does help to distinguish them a little from the horde of Insomnium’s and Omnium Gatherum’s. “Pitch Black Morning” has some excellent spiraling riffs that drip as much technical proficiency as they do listener engagement and wonder. Lastly, in getting back to the clean vocals above, they thankfully aren’t done in the trite, ‘must be used in every chorus’ way. They fit well when used, as “My Head My Prison” can attest.

There’s only four songs to be had here (we’re not including the orchestral, instrumental version of “My Head My Prison” at the end), but there’s some promise for the years to come with Dimman. Guide My Fury is one of the band’s first releases, so it’s to be expected that it has some familiarity to it. But they prove they have what it takes to deliver some emotionally-driven melodic death metal. Let’s see where they take it from here.