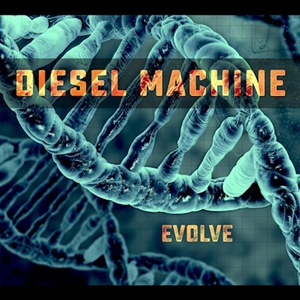 Featuring members who have worked with artists like Halford, Damageplan, Soil, Yngwie Malmsteen, and Michael Schenker among others in the past – Diesel Machine originated in the mid-90’s and released one album in 2000 with Torture Test. Following a devastating motorcycle accident for their bassist Rich Gonzales in 2002, the band was put on indefinite hiatus- finally coming back together over recent years to complete the follow-up effort for Evolve. Twenty years seems like infinity to hear a new record – but the four-piece appears committed to bringing their groove-laden brand of metal back to an underground thirsting for attacking staccato-oriented rhythms, slamming tempos, and a fierce, diverse vocal presence.

The execution and songwriting lean heavily towards a mixture of 90 and 2000’s influences – back when names like Machine Head, Pantera, Crowbar, and Fear Factory made headway and dominated their market. AJ Cavalier as a singer has that venomous bark as well as a call and response slithering low presence at times that melds Robb Flynn with Phil Anselmo – check out both aspects of the switch-ups during “Exit Wound”. Guitarist Patrick Lachman lays down a vicious rhythm foundation – also executing ideal squeals, bends, and crunchy transitions that sometimes delve into djent/metalcore terrain during mid-album highlight “Shut It”. Mixing up tempos with the occasional doom-like slither allows the musicians to set up the big hook payoffs when they wish in dynamic fashion – “Cynical” and “Judgement” an interesting one/two punch that has a bit more Crowbar charm against early Machine Head power. Possessing a fairly accomplished drummer in Shane Gaalaas opens up a lot of different basic ideas, embellishing them with subtle progressive nuances against a solid, powerhouse foundation – the tribal-like fills for “Death March” and subtle double kick tricks during “Nothing Left” killer. Diesel Machine drives live a well-oiled, seasoned outfit – meticulous in craft and keeping the material sharp and on point in under forty minutes.

Knowing the appeal of the aforementioned acts that Diesel Machine draws influence from, Evolve should be a no-brainer purchase for those who love early Machine Head, all eras of Crowbar, and the spirit of Pantera in us all.