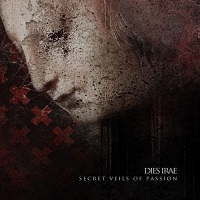 It’s quite evident that on Dance of December Souls, Katatonia had no idea how to end a song

. Take a gander at any one of the album’s eight cuts and you can almost feel a sense that the Swedes wanted to squeak out every idea they could, as means to justify what they were doing. Obviously, things worked out really well for Katatonia with Dance and subsequent albums, probably because Renkse and Nystrom had at least some semblance as to how to write a good song. Mexico’s Dies Irae, unfortunately, suffer from the same idea overload on Secret Veils of Passion, and man, does the album suffer for it.

Supposedly, Goth metal is the core element of the band’s sound, but they have an awfully funny way of showing it. Their attempts at infusing odd-time signatures and jazzy interludes basically make all of these songs

null and void, for Goth metal is supposed to be uncomplicated and fairly stable. Instead, the album’s ten songs (all of which have one word for their title) are clunky and fairly amateurish, hindered even more by singer Dah, who sounds like a really bad Layne Staley impersonator. Dies Irae would be much better off had they settled on two or three ideas for each song, but these songs simply don’t know when to end.