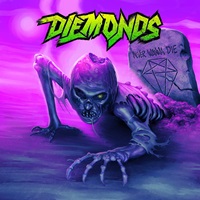 Through the proliferation of retrospective music documentaries and natural classic rock radio evolution, a new generation of musicians melded together what’s known today as sleaze metal. Taking off first in Scandinavia through the popularity of Hardcore Superstar, Crashdiet, and current DR darlings Santa Cruz, the movement is now spreading to newer territories like Canada, where Toronto’s Diemonds call home. Since 2008 the band has gained modest appeal through their two previous albums and prime festival appearances at Rocklahoma, Heavy MTL, and the annual Kiss Kruise. Never Wanna Die is their third full-length and chance to grab stronger international exposure through Napalm – so will this latest batch of songs elevate their brand of sleaze heavy metal to the masses?

The sound isn’t very unfamiliar to those who love the melodic aspects of say Skid Row with a little bit of Guns ‘N’ Roses rawness against occasional heavier strains that come from Metallica during their black album superstar days. Guitarists C.C. Diemond and Daniel Dekay thrust and parry in their dual axe attack, laying down a thick, groovy foundation right from the get go on the opener title track and sinister follow up “Hell Is Full”. Bassist Adam Ziotnik may be one of the hidden assets in Diemonds addictive sound, as he pumps out a wicked low end that rivals Motörhead or Duff McKagan during the straight forward power anthem “Forever Untamed”.

Vocalist Priya Panda not only possesses the right glam aspects on the visual front, but she also has that playful, sarcastic delivery beyond the requisite pipes to pull this material off brilliantly and convincingly. With lyrics casting tales that misfits, outcasts, and wild children can relate to, everything from the somber “Secrets” to toe tapping anthem “Wild at Heart” should place her in league with Lzzy Hale or the current crop of Scandinavian contemporaries of both genders. And at a quick hitting 34 minutes, Never Wanna Die doesn’t waste time getting to the heart of the hook and moving on to the next idea – ideal for backyard parties or highway treks.

Blow off a little steam as Diemonds intend to provide the soundtrack to turn any frown upside down.