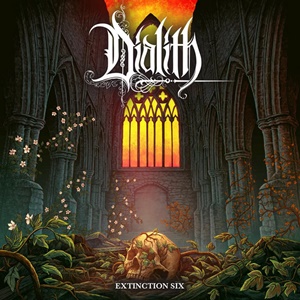 Blossoming from their debut EP in 2017 with Through Stone, Connecticut act Dialith place their own take on the symphonic metal genre by incorporating outside influences from the power and extreme fields. Believing it’s best to pull out all the stops in terms of sonic values, cover art, and songwriting – the follow-up full-length Extinction Six contains seven new songs, the three previous EP tracks with some slight changes (for the better) and an intro to encompass an hour-long journey into a exhilarating, dynamically charged outing.

After the dramatic “Emergence” intro – guitarist Alasdair Wallace Mackie sets the stage for “The Sound of Your Voice” with a propulsive riff charge, incorporating facets of Kamelot and Arch Enemy in his textures. The longer instrumental sections allow the rest of the band to showcase a bit of their chops, the driving fills and double kicks from drummer Cullen Mitchell plus the keyboard flourishes of Charles Woodruff keeping listeners well-engaged to the slight bombast and circular orchestration that filters in and out of this six-minute plus arrangement. The diversity in terms of feel and atmosphere track to track is one of the greatest strengths to Dialith – they inject a lot of the material with this driving nature, where the listener can feel at one with the energy and transitions. Nightwish meets headlong into Evergrey for the catchy mid-tempo “Libra”, while the follow-up “Break the Chains” is Euro-styled power metal brilliance, where all the musicians go for the gusto in a Stratovarius/Sonata Arctica-like montage, the chorus very uplifting for unison audience participation activities.

Bassist Mark Grey adds his superior progressive (and funky) skills in spots of “Where Fire Dwells”, while the band also knows how to take things down to serene, thoughtful proportions on the ballad “The River Runs Dry”. Symphonic metal tends to open horizons not only on the musical front – but also through the vocal performances, and this is probably where some of the biggest growth has taken place for Dialith with Krista Sion’s confidence and range for this record. Elements of Simone Simons and Floor Jansen come to mind when you hear her breath control, ease of note ascension, and sustainability on highlights such as the semi-folk/semi-electric “The Wraith” plus the already mentioned “The Sound of Your Voice”. The epic title track at 17:33 closes the record – conveying a theatrical/cinematic scope from the piano/orchestration calmness at the start, adding electric tension with serious hooks and background choir accents, a calmer midsection and floating back into some heavy progressive action before concluding on a symphonic/soundtrack note. It’s as if Dream Theater met Epica and Nightwish to bare glorious offspring.

Seeking out Jacob Hansen for the mixing and mastering as well as Polish artist Marta Sokolowska for the cover put the proper finishing touches on an already thrilling, professional product. Extinction Six and Dialith hopefully prove to the global masses that there is still plenty of creative fuel left in the symphonic metal tank – and American bands can add their own qualities to the fire.