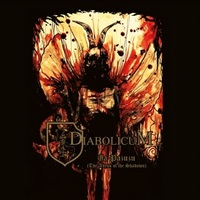 Anytime a band takes 14 years to release an album, it’s only natural to ponder “how things were” in designated timeframe. The year 2001 featured a far different metal underground than it is today, where subgenre manifestations weren’t quite the art they are today, which means a band otherwise unnecessarily in need of designation (like Sweden’s Diabolicum) would have been just fine playing their industrial-tinged style of black metal. Today, that can’t fly – some yokel will have to break the Swedes’ sound down to its core in hopes of cracking the code, or, coming up with another cool new subgenre tag. We have plenty of those, eh?

Ia Pazazu, the band’s third full-length, and follow-up to the aforementioned The Dark Blood Rising (The Hatecrowned Retaliation) (which was also released via Code666, showing just how patient the Italian label is), wrangles the mechanical, militaristic tone of war metal, and merges it with the diabolic fury of primitive black metal. In so many words, they’re like a less outlandish Aboyrm or Tidfall, or for even modern reference, Kommandant.

The searing “Salvation Through Vengeance,” march-to-the-death “One Means War,” and surprisingly triumphant instrumental “Angelmaker,” provide the natural theatrics black metal creates on its own. The speed-for-speed riffing, caveman grunts, and sound samples (usually of some war-time verbiage) create a maelstrom rarely caps itself of. Diabolicum is largely helped by the album’s production values, which bolster a frenetic jam such as “Genocide Bliss,” only because again, it’s blindingly fast. Methinks a more crystalline production job, or even a more raw one would hurt the band’s cause.

In light of the fact it’s taken Diabolicum 14 years to release a new album, the Swedes have been able maintain a thread of consistency between The Dark Blood Rising (The Hatecrowned Retaliation), and Ia Pazuzu. That is a trait worth getting behind in 2001, and 2015.