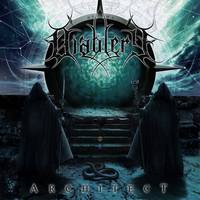 Greece’s Diablery, a symphonic black metal band formed in 2008, after having released a pair of EP’s, step onto the stage with their full-length debut in Architect. As vast and ever-changing as the umbrella of black metal is, the symphonic genre is nothing new and has been kicking around, for better or worse, for some twenty years now. Always in flirtation with the gothic side of things, it is a source of derision among many, but then, what sub-genre isn’t, really? Hell, I’ll take an average band of this persuasion over many of the countless blackened-sludge-whatever bands cropping up out of the woodwork, just by virtue of the musicianship alone. With respect to Diablery, these Greeks succeed with a pretty impressive and definitely above-average outing on Architect.

True to form, there is lots in the way of melody by way of synth, strings and piano, creating potent melancholy, but rarely taking the album into gothic cheese territory. In fact, the intro track “Mysteria Aeterna” is quite a stirring and moody piece of morose piano and viola, as would befit a horror flick. Setting quite an appealing tone, once the band get into it, it’s apparent that these guys are no hacks, not by a long shot. Quite mature composition and practically impeccable musicianship are representative of Architect. Guitars shoulder the load with dark melodic riffing, over tight, powerful drumming with lots of blast and lightning quick fills and doubles. The symphonic element bathes the frenzied metal sound in the epic wash of minor atmospheres. With some dynamics scattered throughout the record, Diablery keeps the narrative moving along well and does a good job at keeping the listener’s attention throughout. Vocally, the band employs a furious and standard approach, with a few brief moments of clean singing which work effectively to enhance the drama.

Somewhere perhaps at the colliding points of bands like Dimmu Borgir and Fleshgod Apocalypse, Diablery serve up a solid album of their own take on this genre, and for what it lacks in freshness it makes up in execution and atmosphere.