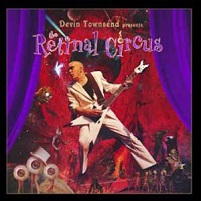 Devin told us that a show of this magnitude wouldn’t be possible in Des Moines, IA, making the well-infiltrated England the place to put on his career-spanning Retinal Circus show. Typical of Townsend, no corners were cut; it’s as grandiose, vaudeville, and intentionally goofy as one can predict, but he was able to cram all the hair-to-skullet-to-bald details into a nice little package, one that does more than enough to give outsiders a sense of how much he’s accomplished while doing different things. Even Strapping Young Lad is included…that’s how you know ‘ole Devy wasn’t messing around.

Shot during a one-off special show in London, The Retinal Circus encompasses a storyline involving a young man by the name of Harold, whose life is examined via a myriad of metaphoric and meaningful relationships through Townsend’s songs. (This action is captured on the video portion, but not the audio, by the way.) Narrated by Steve Vai, the story of self-actualization is tantamount to Townsend’s mostly upbeat recent material, a lot of which is focused upon (“True North,” “Lucky Animals,” “Hyperdrive,” etc.) across the set, with various actors, props, and visuals to carry things home. Visually, it’s like a play within a metal concert. Organizationally, it might be one of Devin’s greatest triumphs to date.

Guests such as former Strapping Young Lad compatriot Jed Simon as well as current DTP mainstay Anneke van Giersbergen supply a hearty dose of support for Townsend, especially Simon who was there to get the SYL connection driven home. Even with such a notable passer-by as this, the story and thematics roll on, Ziltoid makes an appearance, and by the time The Retinal Circus is ready to bring down the curtains, all phases of Townsend’s career are encapsulated properly, and without a hitch. They did this for over two hours (including a break), yet somehow, it coalesces into perhaps the most proper representation of one of metal’s most zany (and enduring) characters.