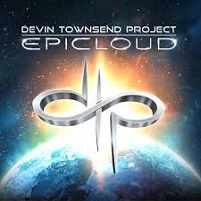 This might sound blasphemous to some, but Devin does pop metal better than he does the type of balls-out, maniacal cyber-thrash he was doing in Strapping Young Lad. Perhaps it’s because the light, ethereal side of Devin is honest and transparent, resembling his true colors these days, as opposed to the false front he had to put on during SYL’s heyday. Any way you slice it, it’s hard to balk at an album like Epicloud, which serves as the proper follow-up to his equally irresistible 2009 Addicted effort.

Townsend has often cited Def Leppard as his primary influence/sound reference for albums such as this, and while it’s a partial misnomer, Epicloud has king-sized, arena-ready pop hooks that are every bit as humungous as the songs onHysteria. The metal pulse is still there, though, and it gives Devin and gang the ability to congeal the two sides with relative ease, as heard on “Kingdom,” a song that is resurrected from Devin’s 2000 Physicist album. Even “Lucky Animals” has enough muscle to cover up for the goofy Mr. Bungle/Zappa-like doings.

The theme of the album is set off right away on “Effervescent!,” which features one of Devin’s trademark maniacal choirs, and it’s virtually impossible to lose sight of the vocal sequence (yours truly has been singing it for days). Joining in on the fun is former Gathering siren Anneke Van Giersbergen, who for lack of a better term, just kills it on album highlight “True North,” “Save Our Now,” and “Angel.” “True North” and “Angel,” specifically, are two of Townsend’s creative triumphs, the first an ear candy, saccharine treat, and the latter an atmospheric joyride that crescendos with a moving choir outro that concludes with the album’s “Effervescent!” theme.

Epicloud rolls everything Townsend does well into one near-perfect body of work. It’s right in the wheelhouse for anyone who has followed the Canuck over the years and effectively puts another feather in the cap of one of metal’s most enduring genius minds. May you continue to be wacky, off-the-cuff, and practically oblivious to the rest of the metal world, Devin.