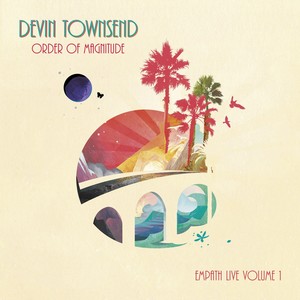 Continuing the line of exceptionally well done live albums, Order of Magnitude: Empath Live Volume 1 sits as another success for Devin Townend and company. Captured during his winter 2019 tour in Europe in London, this series of shows took the ambitious Empath album tracks and utilized a stage full of players to attempt to replicate it’s massive studio sound without any backing tracks to help out. The result is a more playful experience that the video joyously illustrates.

More than anything, this is a live album that’s just fun to sit back and watch/listen to. The sound, of course, is fantastic and the mix the same high quality that Townsend always issues with efforts like these. But there’s a real intimacy to watching this and watching it all unfold. Almost two hours in length, the sixteen tracks here will keep you thoroughly entertained. Townsend is his usual self, hamming it up with the crowd and getting them to do some ridiculous stuff, such as putting their hands on their head and saying ‘beep’ during “Why?” or passing drinks back to the sound guys in the lively cover of “Disco Inferno.” But the interactions with the rest of the band are just as enjoyable to watch – it’s evident that the band has having a blast together, and that energy is infectious, even through a television screen. There’s a lot of costume changes, flashing lights, and video going on in the background but it remains grounded – the shooting is also worth mentioning as there’s a lot of wide shots to focus on multiple people at once and it gives you a great impression without resorting to cutting from person to person every 4 seconds. It’s a relaxed yet enthralling atmosphere. Setlist-wise, there’s a lot of focus on Empath (for obvious reasons) but it’s rounded out by a nice selection of cuts from many eras of Townsend’s material without pandering too much to the ‘usuals’ (outside of “Kingdom”).

Really can’t go wrong with this one if you are a fan of Devin Townsend’s music. It’s a beautifully captured show and one that embodies the energy and charisma of his life performances. Not a bad showcase to gather a few friends together and enjoy in these trying times of no live music as well.