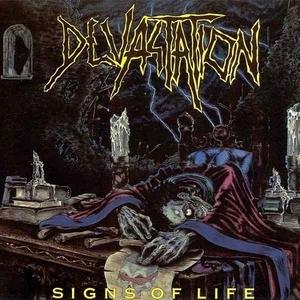 In the 1980’s when thrash first exploded, areas like San Francisco, New York, and Germany of course put the style on the map. Subsequently, a new generation from all parts of the globe felt the desire to put their spin on the energy, velocity, and aggression that this new sub-genre offered. Devastation from Texas hit the scene in 1986, releasing their debut album Violent Termination the following year for local label Zombo Records (also releasing Watchtower’s debut for all trivia nerds) before Combat Records signed them to their burgeoning roster. Signs of Life as the follow up in 1989 pushed their frantic assault onto the underground masses – and Italian label Punishment 18 Records believes with the re-establishment of thrash as a viable entity in today’s market, people need to be aware of this quintet’s efforts.

The nine songs on this record prove Devastation aim to live up to their moniker – commercial aspirations never entering the playbook of riffs, transitions, and maniacal vocals. When the parts slow down to a controllable, mid-tempo groove within “Eye for an Eye” and the opening sequence of the title track, it’s short respite for the next whirlwind speed exercise of word spew and bevy of guitar/bass/drum relentless combinations that rival early Holy Terror, Kreator, Sepultura. Vocalist Rodney Dunsmore didn’t exactly command the respect of say Hetfield, Zetro, or Mille, as the roaring, take no prisoners delivery seemed stagnant or monotonous against the blitz riff runs, divebomb lead spots, and charging snare/kick combinations. While most of the material gets in and out in under four minutes, the next to last cut “Fear of the Unknown” provides interesting twists in terms of mid-tempo to doom sequences and progressive instrumental nuances in the conclusion that allowed the band’s musicianship qualities to shine in a slightly longer format, tipping the scales at just over six minutes.

Forever banished to that second or third tier of thrash bands that had a serviceable following but never rose in the ranks worldwide, Signs of Life showed remarkable improvement over the production qualities, tones, and songwriting for their debut. Good for the youngsters to experience from a historical perspective, but not at the level that Holy Terror or Forbidden were achieving on record for that point in thrash.