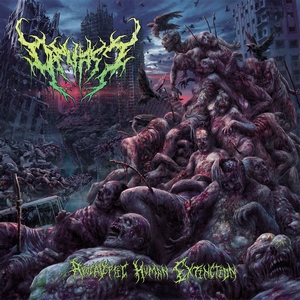 Brutal death metal troupe Devast are at it again once more. Apocalyptic Human Extinction is the band’s third effort, following last year’s Into Decimated Reality. However, unlike said album, Apocalyptic Human Extinction doesn’t get a little lift from the artwork (Reality had a still rather cool and hideous creature that adorned the cover), with a clichéd pile of gore-ridden bodies this time around.

The unfortunate part about Apocalyptic Human Extinction is how forgettable it is. The band plays at a near constant rate of speed, which if you couldn’t guess off the top of your head, is as fast as humanly possible. Sure, there’s some upsides to that if you just check out one song – it’s a frenetic rush that will knock you back in your seat. It’s heavy and brutal and it may even wow you with some of the super quick technical riffs. But when you get nine variations on the same exact formula – blast, technical riff carnage, low gurgling vocals – it starts to get a bit stale, even at it’s rather short 22-minute runtime. Oh, and knock off one minute for a completely pointless introduction (which reappears briefly at the start of the last track). There’s almost no way to distinguish one track from the other – certainly some of the technical flourishes that weave into them have some variation, but the band’s favored tempo makes it rather hard to discern the differences without some real song dissection.

With the brutal death metal scene pretty well established, there’s always a market for an album like this (and many that will likely sing its praises). But outside of that niche market, most will find Apocalyptic Human Extinction to be a forgettable blur that pushes technicality for the sake of technicality at speeds that tend to hinder rather than help. 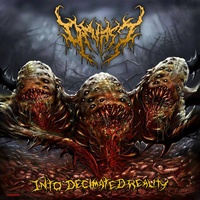