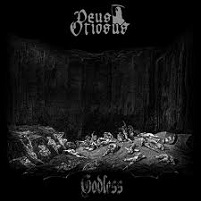 The rapidly-closing year has proven to be the year in which it takes zero thought to be in a death metal band. Granted, brain cells in certain segments of death metal were long at a premium anyway, but the now beaten to death old-school, retro militia has taken the brain cell count down a bit. And while that shows no signs of slowing down, there are those with at least some modicum of thought in their thick skulls to prove that playing vintage death metal is more than reading Autopsy tablature while on the can, which is where Denmark’s Deus Otiosus comes in.

Godless is the second album from the Danes, who formed in 2005. Their sound is decidedly early 90’s, with some cues taken from Cannibal Corpse’s Eaten Back to Life in the riff, not vocal idea department. Here, chunky riffs are usually sent in first, then substituted with some type of blackened thrash portion, some of which recalls Blessed Are the Sick or pre-Roadrunner Suffocation. Perhaps the best instance of this comes via “New Dawn,” which is an instant neck-snapper, placed perfectly at the third song slot, thus heightening the extremity of “In Harm’s Way” and the excellent “Pest Grave.”

Across the board on Godless, Deus Otiosus engages in smart songwriting. Whether it’s the punkish d-beat churn of “Surrounded by the Dead,” or the Nordic pull of “Cast from Heaven,” the band refuses to fall prey to the trappings of easy-way-out songwriting. Therefore, Godless may not be your “thinking man’s” retro-inspired death metal album of 2012, but it’s definitely not a few bricks shy of a few load, possibly even being the brightest bulb in what has been an otherwise dimly-lit lamp.