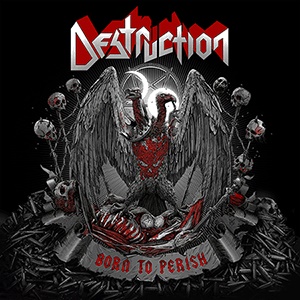 Expanding to a four-piece for the first time since 1998’s The Least Successful Human Cannonball (the last album not to feature Schmier in the normal vocal/bass allotment), Born to Perish signals a fresh lineup as the two veterans team up with the reliable Randy Black (ex-Primal Fear, ex-Annihilator) on drums and newcomer Damir Eskic on second guitar. Never fear any switch up from the band’s penchant for thrash – as well as the political/social commentary that fuel the band’s lyrics, as it’s evident that in this tumultuous world we live in there’s plenty to debate, discuss, and spit anger towards. It’s more the case of keeping the ship steered on course for punishing, addictive compositions – and that’s what you’ll get in spades here.

Mike Sifringer and Damir pulsate through crunchy rhythms and an array of counterpoint measures – feeding off each other’s enthusiasm and drive for winning connections on “Inspired by Death” and the vicious “Tyrants of the Netherworld”. A power propulsion embodies the kit maneuvers of Randy Black, understanding the proper double kick mechanics and fluid fill passages necessary to engage listeners on all levels right away for the blistering title track opener while being very steady and mindful during his transitions in a more mid-tempo churner like “We Breed Evil”. Evil guitar melodies signal the impending Schmier spitfire vocal grit and eerie chorus for “Betrayal”, while a specific Ukraine-related plane crash storyline for “Fatal Flight 17” gives the man a chance to scream, shout, and penetrate in his unique, Teutonic rage platform. The record contains much more twin harmony tradeoffs and a thicker wall of guitars that should open more possibilities up from this point forward for the group to take their sound wherever they wish to go. Favorites change by the day (the sign of a strong, diverse thrash record) – at this point, “Filthy Wealth” and the rabid drumming against shifty guitar activities during “Ratcatcher” gain devil horns salutes, but there really isn’t anything weak out of these ten tracks.

Possibly the engagement of more historic Destruction material for 2017’s Thrash Anthems II record put more fire into the songwriting and performances for Born to Perish. It’s another prime example of thrash done the right way – and should gain wide acceptance from Destruction maniacs young and old. 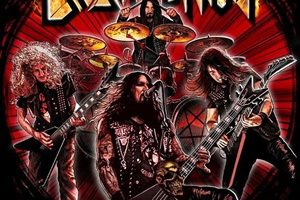 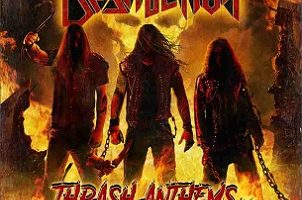