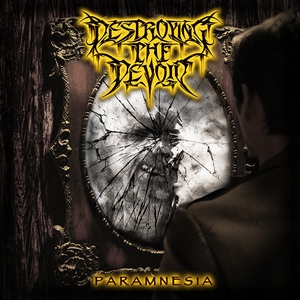 The brainchild of Deeds of Flesh’s Craig Peters, Destroying the Devoid is making sure not to be a pale imitation of said act. In fact, one may be pleasantly surprised when they lay into Paramnesia, as the more nuanced and atmospheric approach to death metal comes across as something outside of the usual norms. Where Deeds is more a technical but blunt force, Destroying the Devoid takings things in more experimental ways.

There’s a cinematic quality to Paramnesia that quickly crops up and adds to the interesting design of the album. Blastbeats swirl around the opening synths of “Chasm of Existence,” creating something a little bit space-like but the brutal death metal riffing brings things back into reality, and injecting some slight elements of melody and groove only suit to strengthen the band’s attack. “Carnivale Nocturno” brings these elements up into a creepy yet almost upbeat tone before some heavy as nails riffing intermixes and diverts things into firmly extreme territory – but in a way that feels fresh and interesting. While the added synths do impact the approach, and occasionally give it an almost blackened sound, the riffs are the glue that holds everything together. The songs are of the longer variety, going so far as 10-minutes in length – a challenge for a more brutal, death metal-driven approach. But the wide variety of death/black/extreme riffing make the songs work, with each giving off a vibe to separate from the tracks before it. In particular, the last three connected tracks, “Beyond the Dark Veil” (Parts I-III), bring in an atmosphere (including a few clean vocals and acoustic guitar) that the technical yet catchy melodies seem to exploit, feeling akin to a trippy death metal soundtrack.

An album more interesting than your standard extreme act, Paramnesia should fill the needs of death metal fans of the technical and progressive varieties. Cinematic elements, brooding atmosphere, and crushing death metal combine in a way that is rewarding to listen to, yet appeals from the get-go.