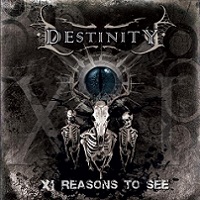 Once oh-so-close to entering the upper-echelon of Euro thrash, Sweden’s Destinity have taken an odd step to the side on XI Reasons To See. Many have derided the band for its Hypocrisy-laden sound, something this scribe has often overlooked, but no more – the Tagtgren influence is all over this thing. Granted, they could have picked a way worse band to mimic, yet it’s hard to get past some of the Abducted-aping going on here.

Leading up to this album, the band was an energized, technical hybrid of Darkane-styled thrash pyro, coupled with minor melodic death metal leanings. It came together quite nicely on 2008’s The Inside, which would have been the right path to stay on. However, the band drifts into atmospheric metal territory that again, is right in line with what Hypocrisy were doing for the better part of the aforementioned Abducted and Final Chapter albums.

Not to say there aren’t any moments worth checking out: the break-neck opening of “Just Before” has a virtual avalanche of deft riffing. “In Sorrow” is far and away the best number here, boasting a crisp, highly memorable chorus, while the slower, mid-tempo swirl of “To Touch the Ground” also emerges as a winner. From there, the awkward movement of “Your Demonic Demise” doesn’t do the band any favors, while the tepid “Silent Warfare” and “Self Lies Addiction” bring the album to a gradual halt.

We ranked this as a 7.5 primarily because of Destinity’s brimming potential, yet judging from the uninspired angle of XI Reasons to See, one would have a difficult time figuring that out. Perhaps the band is trying too hard to nab the atmospheric death metal brass ring…we don’t know. What we do know is that this is mightily underwhelming. 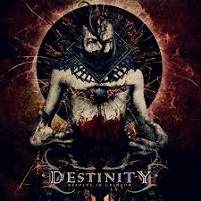