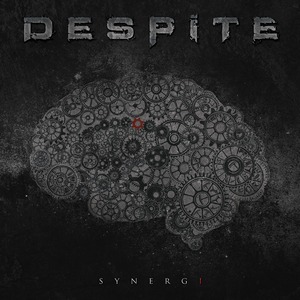 Initially discovering this act a few year back with the announcement of Peter Tuthill (formerly of Construcdead and Carnal Forge), it seems as if it’s taken quite a bit of time to get the band’s third act, Synergi, off the ground and running. But like all good things, Synergi is worth the wait. This is modern melodic death metal that is capable of showing both teeth and heart.

Like a number of similar bands that have put out some excellent melodic death metal (Synthetic, Countless Skies, Rage of Light) – staying firmly in the realm of melodeath is not in their plan. Making use of the traditional does come in handy though, with “Soul = Denied” starting things off on the thrashier side of things, with Tuthill shouting atop catchy, mid-tempo riffing. “Give Me Life” uses faster and more violent riffing in the verses (along the lines of Carnal Forge) but smoothly transitions into a soaring chorus as the song continues. “As You Bleed” pushes more groove into the mix, along with some truly bottom-heavy sounds but the band again breaks things up for a melodic chorus. “Time Lapse” works as the quasi-ballad for the album, sounding more in line with 2000’s hard rock but it works as an effective change-up before “Chaos Trigger” accelerates the band back into their mid-tempo crunch. Also worth noting is the use of three guitarists, which allows for some interesting riffs and melodies, with “Praedonum” having some of the most initially arresting.

The little bells and whistles (and diversity within) keeps Synergi from sounding like yet another modern melodic death metal band. Despite has a strong range of players involved, with keeps them flirting at the boundaries and providing material interesting enough to last close to an hour. Easily worth checking out for the melodeath fan.