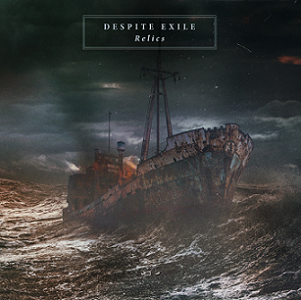 Disdain, or even fervent dislike for deathcore among those who brand themselves as “true metal” remains at peak levels. We’re certainly not going to venture into questioning and overanalyzing the bog of nondescript, crab-walking bands, many of whom, on the surface, appear to be doing it because it’s the latest trend. That’s their choice. However, it’s right and just to at least open discussion on where these bands can go musically. Before you ponder or even say “Duh, nowhere,” consider that Italian troupe Despite Exile at least have the (partial) good sense to baste their songs with melody. If they didn’t, then Relics would be a total bust.

All of the typical, hand-wringing, “I can’t believe they’re going this route” elements are here, notably, the brick’d production job, processed drums, predictable beatdowns and bree-bree vocals. In a word, Despite Exile aren’t doing any better than their American counterparts. The only saving grace is that as Relics crawls along, a little lightning zip of melody will work its way in. You can snag these moments on the title track, “Of Imaginary Shipwrecks” (gosh, what a pretentious title) and album closer “Ephemeral,” which fittingly enough, is clearly the best Despite Exile have to offer, including a siege of Dark Tranquillity-like riffing and climax.

You could poke holes in bands like Despite Exile all day, even in lieu of their technical capabilities. Songcraft and dynamics, though, appear to be something they kept in mind when putting together the songs for Relics. Whether they choose to continue to go down with the deathcore ship is their choice.