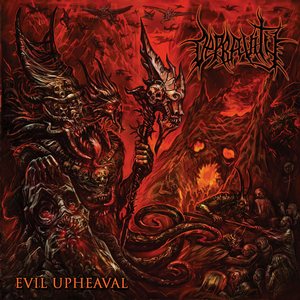 The art of death metal is not one of subtlety. Australian newcomer Depravity are quite keen to this notion with their first full-length (following up on one previous 2016 EP). With plenty of brutality and aggression in tow, Depravity prove to be an exciting addition to the death metal realm.

Even if there’s not much brought to the table in terms of innovation, Depravity show that they have a real knack for knowing what works. Evil Upheaval is nothing if not tapping into that primal, timeless death metal vein. It’s assaulting and blunt in its heaviness, with ominous riffs that contain plenty of bite behind them. Explosive speed and intensity will initially provide that ‘wow’ factor that is sure to attract the extreme crowd (“Despondency”). Groove has its place as well, and tends to be equally destructive in tone (“Repugnant”) yet allowing for some variety. As do some melodies, most often in the solo/lead work, but they do sneak a few into the somewhat technical structure (“Tormented”) – giving the listener something to grab onto outside of the massive riffing.

Despite a formula that has admittedly been done many, many times before, Evil Upheaval works brilliantly. Depravity can whip up a tornado of intensity and jackhammering riffs when it’s called for, but they don’t forget about a sprinkling of groove and melody for balance. The type of combination that is more expected from a veteran act than one so fresh in the scene (admittedly, the band members have been in previous acts before). Nonetheless, those wanting a brutal rush a la Cannibal Corpse or Hate Eternal are going to dig this quite a bit.