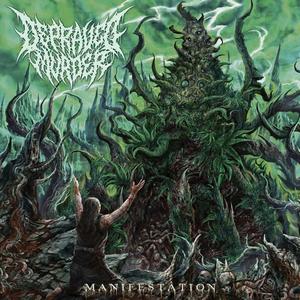 There’s a certain comfort in knowing that if it says Comatose Music on it, you know you are going to get something heavy. Depraved Murder hail from the Indonesian brutal death metal scene, and you can tell that they’ve had some influence from some of the United States’ heaviest acts in addition to their own. Manifestation is short, sweet, and full of massive riffs.

With aforementioned nods to some of the US brutal scene, such as Devourment and Suffocation, there’s plenty of aggression to be found. A thick, monstrous guitar tone is a wise choice for an album like this, adding to the heaviness of the album and giving it the extra punch. Though each track goes through and demonstrates significant power behind it, whether it’s the rolling, mid-tempo grooves that retain a remarkable amount of catchiness for the genre while keeping the feeling murderous or some blast-driven accelerations that provide a nice change of pace. The vocals are pretty much the standard for what you would expect – they are out in front but not overbearingly so like in many deathcore acts, but the low guttural style is retained and fills its role. At the end of the day, the most important pieces that give a group the thumbs up or down in this genre is the ability to maintain both brutality and interest simultaneously, and the 29-minute run of Manifestation keeps things tight. The slick grooves are the band’s strongest asset, and the title track is a good starting point in seeing what you are going to get (though yes, genre fans are already pretty sure of what they will be receiving here).

Depraved Murder are nothing less than a blunt force to be reckoned with. You aren’t going to get any surprises around the corner, but this is reliably entertaining brutal death metal. Nothing more, nothing less – which is perfectly okay if that’s what you are after.