Denominate – Those Who Beheld the End (Self-Released) 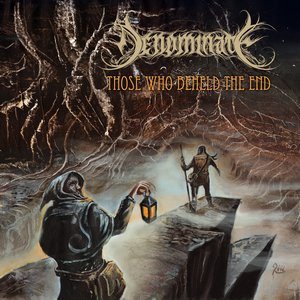 Finnish death metal act Denominate previously brought forth an EP back in 2014 titled Realms of Confusion (the band then called Encrypted). A death metal band with plenty of Death and Carcass influences for sure, and played to the more brutal end of the spectrum, with the afore-mentioned influences giving some melody to balance it out. The band’s first full-length album continues to move into the melodic spectrum, but not without some growing pains.

There is a lot to enjoy about Those Who Beheld the End, but its scatterbrained nature keeps it from unveiling the band’s true potential. The tracks vary from each other, sometimes more erratically than others, but things range from the technical to the melodic to the progressive to the brutal. It’s a lot to take in, and the band seems to take the middle ground with these things more often than not. It’s almost as if they are testing the waters with individual tracks and trying to figure out the best route to take. As a debut, this isn’t a bad thing – better to have the chance to experiment now and figure out what works now rather than have an identity crisis 2-3 albums from now. If they continue to inject the more melodic and progressive elements in (see “Apeirophobia” or “Penumbra” in particular), they could easily fall upon a more strengthened formula.

A clear talent permeates the waters of Those Who Beheld the End, but the potential will probably best be viewed with their next go-round. If the band is successful in locking in the direction at which to proceed, they could really begin to make their mark. The songwriting itself is strong enough to get behind now, but it seems that greater things lie in wait.