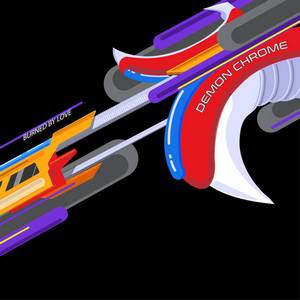 Demos, singles and EPs play a pivotal role in heavy metal. Fans often give them just as much attention and respect as full-length albums. No matter the number of songs or the quality of the production, we snatch them up and make room for them on our shelves and turntables. Like an appetizer satiating our hunger for the next main course, they give us a taste of what’s to come, or in the case of a debut, provide a glimpse into the birth of a band’s sound.

The heavy metal maniacs in Demon Chrome, hailing from Providence, R.I., have a few such releases under their belts, including the five-song Chrome Demo(n) demo, released in July 2018, the Midnight Dreamer single, released last March, and now the four-song Burned By Love EP, released in December.

Characterized by the whiskey rock n’ roll of early AC/DC and the full-throttle, take-no-prisoners attitude of Motörhead, Demon Chrome aren’t messing around on their latest release. The four songs here are filled with driving riffs, galloping rhythms, pummeling drums, catchy melodies, and lightning leads. Hard rock, NWOBHM, speed, and traditional metal each play their part in the band’s sound.

The EP kicks off with “Tactical Response Deployment,” which opens with some haunting guitar lines, creating an ominous atmosphere, before launching headlong into an up-tempo rocker reminiscent of Megadeth’s “Wake Up Dead.” Marc St. Sauver’s thunderous drum work, Dylan Kulpa’s gritty vocals and lyrics such as “See the tanks rolling in as doomsday draws near/Condemned to die under the gun/The missiles that rake the sky would just as soon promise death/As the preachers and politicians would offer salvation” make this the darkest song on the EP.

At just over 3½ minutes, “Half Past Midnight” gets in and out. A ball of frenetic energy, the song retains the up-tempo pace of “Tactical Response Deployment” but injects an infectious guitar melody alongside plenty of hi-hat action from St. Sauver and bounces along with a bit of Thin Lizzy swagger, thanks to Nick Pellegrino’s bass work. Also reminiscent of the Irish rockers is the twin guitar attack from Kulpa and David Booth.

By far the catchiest song of the EP is the title track. It’s a bit more mid-paced in the riffing and rhythms than the previous two songs, but when Kulpa’s vocals enter, the song segues into something that calls to mind early-to-mid-period Rush. The backing vocals by Katie Corticelli in the chorus provide a nice contrast to Kulpa’s grittier delivery, yet the two blend well together. Both Booth and Kulpa unleash some squealing solo work in this one.

The final song, “Chrome Demon,” is also the longest on the EP, clocking in at just over 8 minutes. Similar to the colorful album artwork by Kulpa that reminds this scribe of Defenders of the Faith, there’s plenty of Judas Priest flavor to be found throughout this one, whether it’s “The Helion”-like intro, the driving, dual-guitar attack from Booth and Dylan once again, or the dialed back tempo and stretched out chords about halfway through that give off a “Beyond the Realms of Death” vibe. As that section fades out, the album comes full circle when the listener is once again brought back to those haunting guitars and the ominous atmosphere found at the beginning of “Tactical Response Deployment.”

With less than 23 minutes of total run time, I’m amazed at just how much Demon Chrome is able to pack into these four songs. You heard me name-drop a lot of bands in this review, and while Demon Chrome’s influences and inspirations are evident, make no mistake – this is a band that has found its own sound and you’ll know its Demon Chrome when you hear it. Familiar though that sound may be, the beer-soaked, denim-covered anthems that make up Burned By Love and the band responsible for them give us a fresh opportunity to champion that tried and true cocktail of hard rock and heavy metal. So, raise your glass, raise your fist, and enjoy the ride!