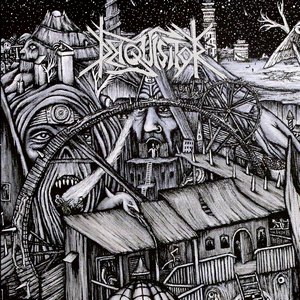 Rooted in the glory of the cavernous death metal before them, Deiquisitor aim to set further into this grimy and unsettling world with their second full-length, Downfall of the Apostates. The Denmark-based act is full of experience, with members being involved in other extreme acts over the years, even if this release is only Deiquisitor’s second release. A piece that does come into play with the level of finesse they pull off.

Owing heavily to two of the “-tions” in particular (Incantation and Immolation of course), there’s a clear bit of homage to the early ‘90s in their abyssal death metal. It’s notably filthy without going too far into the extremes – a clear(ish) approach allows everything to be heard within the band while diving into the darkness. They also never rely too much on the grueling tempos in either direction, seemingly much more comfortable in the mid-tempo ‘riff-crusher’ section. It works well for the sound though, giving the listener meaty riffs with some occasional drifts into more melody (but again, nothing too far outside the expected). Perhaps that’s really the one thing that’s holding back Deiquisitor from stepping things into the next level. The word that continually comes to mind is comfortable. An odd pairing for a death metal album, but Downfall of the Apostates is so drenched in what you’d expect it to sound like, that it never offers any sort of surprise. Is it well played and structured? Absolutely! But it never reaches the level where there’s a genuine feeling of excitement about the direction that they are moving in.

Deiquisitor does understand death metal and its strengths and weaknesses quite well. Unfortunately, that knowledge doesn’t lead into anything that goes farther than something that feels quite middle of the road. With their skillset, it would only take a slight left hand turn to get them into something that feels less complacent.