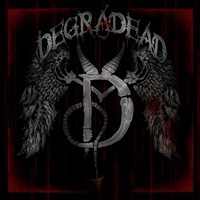 Gaining immeasurable traction thanks to ex-In Flames guitarist Jesper Strömblad (who helped along with other In Flames members in the recording of debut album ‘Til Death Do Us Apart), Stockholm’s Degradead are a furious quintet that straddle the melodic death/thrash template. Unusual for a band one decade in to pop out a self-titled endeavor, but here we are at the fifth full-length with four-fifths of the lineup still original members and raring to showcase all nuances of their aggression and fury.

Wasting no time getting the adrenaline-fueled blast tempos and caustic screams in full force for “Afterlife”, the record has remarkable balance between slightly more ‘commercial’ fare in terms of the guitar harmonies/ hooks and clean choruses of “A New Dawn” and the incredibly sweeping guitar tricks plus melodies contained within highlight “Say Your Last Goodbye” that could be in contention for the melodic death song of the year. Guitarists David Szugs and Anders Nyström lay down a deadly rhythmic riff parade, picking spots to execute those addictive lead breaks and ear candy that keeps listeners coming back for more – check out the twisted “Grand Eternity” for both facets of their abilities at the axe.

Soilwork, At The Gates, and In Flames are three acts that come to mind the most when hearing this, but the ferocious bark of vocalist Mikael Sehlin along with the heavier tones and production values makes me think that Degradead is digging a little deeper into the extreme metal scene for fueled inspiration. Blood-curdling larynx work punctuates “The Blinding Crusade”, the mid-tempo guitar work chugging along to provide dynamic contrast – and the 11 songs flow by in a tight 43-minute time frame, leaving no aural lag for your headspace.

Euro-oriented melodic death/thrash for the most part contains the right finesse, adrenaline, and keen musicianship to become enduring. Degradead as a result is another winner in my book. 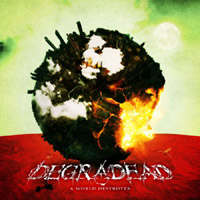