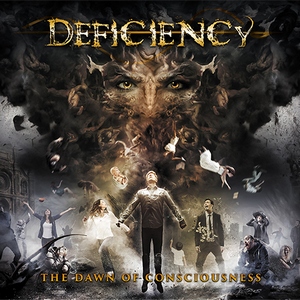 The umbrella of modern thrash often lends itself into either more commercially-viable waters or that of heavier death metal influences. This of course, begs the question, why not both? French thrashers Deficiency have returned with their second album, The Dawn of Consciousness, and are able to adequately answer said question.

Obviously the thrash sound is what’s most apparent on the album, and while it’s what does define the band, the sprinkling of other influences are what make Deficiency stand out a little more brightly. Take the song “Nausera,” in which one can start to scribble down influences, outside of thrash, moving into traditional metal, death, progressive, and even some slightly technical waters. If it seems tiring, rest assured that it’s not – grooves help to slap the pieces altogether and the whole process is rather seamless. Vocals span a similar gamut, with everything from shouts to growls to clean singing finds it’s proper place within the song structures. Some tracks are free to pull out the stops, such as the galloping opener “Newborn’s Awakening” and others attempt a blurring melodic/thrashy hybrid like “Another Fail to Come.” But two tracks take the longer road, but end up giving some valuable results – “And Now Where Else To Go” and “Post Knowledge Day” both implement things such as acoustic guitar and synths to a higher degree than heard elsewhere and the fleshed-out timeline serves to strengthen the band’s songwriting.

Those who prefer to take their thrash in a more modern approach should undoubtedly get a few spins from Deficiency. The Dawn of Consciousness contains the beginnings of what could be a rather interesting progression if the band chooses to take the more unique pieces of their longer tracks and fuse them with both the aggressive and melodic nature of the other tracks in a compacted time zone.