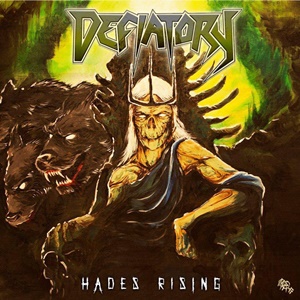 Forming with the intent on paying homage to the Bay Area thrash scene, Defiatory deliver quite a fierce, relentless sound on this second album Hades Rising. While many upstarts rape and pilfer the back catalog of riffs, hooks, and grooves from Exodus, Slayer, Metallica, Megadeth, and Testament – it takes a special combination of talent and tightness to stay relevant in an age where thousands of acts want to grasp attention these days. It’s clear after minimal passes that as a five-piece these gentlemen know how to execute varied thrash with that added intricacy/technical touch that should separate them from the pack.

The guitar mechanics and speed/melodic break fusion from axe executioners Ludvig Johansson and Ronnie Björnström takes center stage as the foundation of Defiatory’s style. It’s almost impossible not to furiously headbang or windmill to the thick, circular nature of “Dance of the Dead” as well the quicker ballbusting “Death Takes Us All” – the latter containing some sick triplet action against the Tom Araya-ish commanding chorus from Martin Runnzell. At times settling into more melodic textures to keep the proceedings more dynamic, “Morningstar” contains those semi-commercial nuances one got used to from Megadeth in the Countdown to Extinction chart peak era of the band. It’s obvious the drumming has a lot of that whirlwind Dave Lombardo nature in terms of double kicks and sick transitions (check out “Down to His Kingdom Below” for Jon Skäre’s finest hits), but he also knows when to just settle into his steady groove responsibilities. Occasional gallops filter in and out to give certain songs a bit more of that Iced Earth/Heathen thickness – while Martin’s natural raspy yet clear melodic delivery serves as a reminder that you don’t have to be all evil/brutal to get your point across in thrash.

Eleven songs that pack that punch, Hades Rising contains the necessary speed, power, and sophistication for Defiatory to become a surprise breakout to the metal community. And yet we should not be so surprised, as Swedish thrash can stand toe to toe with the best from other notable hotbeds like the US and Germany. 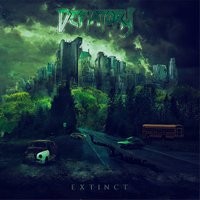