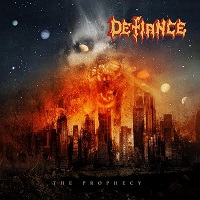 More retro thrash, but this stuff is actually authentic. As part of the third or fourth tier of Bay Area thrash bands

, Defiance made only a slight dent with 1988’s Product of Society, an album that while punchy, lacked the sort of sonic “oomph” to place them with big boys. After a 15-year hiatus, the band returns with the equally snarky The Prophecy.

For the most part, Defiance is stuck in a time-warp, as The Prophecy has the romp and roll of a mid-80’s thrash album. Granted, it’s not terribly difficult to re-create this stuff, but there’s this charming enthusiasm to songs

Vocalist Steev Esquivel (also of Skinlab) has a voice tailor-made for thrash and it’s dead-on during portions of “Sloth,” where the necessary punk-edge is required. Outside of that, The Prophecy reads directly from the Testament/Dark Angel/Exodus script. Basically, if those bands tried it back in the day, Defiance is doing it in the here and now, which ultimately kicks this album down a few notches.

We’re running out of thrash bands to reform. Defiance weren’t probably at the top of anyone’s “must get back together list,” but The Prophecy legs out the aforementioned retro thrash movement by a mile. It’s coming to a standstill, though, which begs to ask: what can any of these bands do next?