Somewhere inside Deep in Hate’s third release, Chronicles of Oblivion, there is a death metal beast trying to rear its ugly head.  Unfortunately, it finds itself inside a cage of deathcore trappings and dime-a-dozen breakdowns.  It’s not short on interesting riffs and some solid groove, but for every one of those moments, shortly there after follows a mediocre breakdown.

On the positive side of things, musically speaking, this is better written and executed than any of the ‘big’ names in deathcore recently (Whitechapel, Carnifex).  The Aborted-esque groove (Svencho himself even drops by for some guest vocals in “Wingless Gods”) present in a number of the songs give Deep in Hate something for listeners to sink their teeth into as opposed to being simply bombarded by breakdowns.  There are also some great solos (“The Unheard Prayers” comes to mind) and some frantic blasting/jackhammer riff moments (“The Divide”) that are simply vicious.  There’s even some melody that will captivate towards the end of “Beyond.”  It’s clear that the band has some definite songwriting skills and finesse.

As eluded to in the opening, for all of these stand up and cheer moments, there are numerous moments of tedious familiarity.  “Genesis of Void” starts galloping only to bring things to into that stereotypical, chugging deathcore breakdown zone.  “Altars of Lies” starts out blistering as well, but also turns over to the more generic side of things before coming to a close.  Unfortunately, these aren’t the only two cases of this on the album.  It’s tough to see a band with potential getting stuck in the trapping of tradition and familiarity.  As stated already, it seems the band is most capable if they could just step outside of the box a bit more.  Until then, expect to see more of a “meh” response instead of an enthusiastic “yay.” 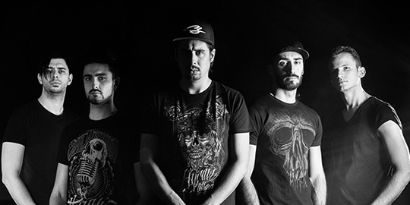