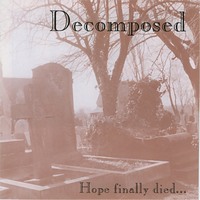 Some back story on Decomposed’s Hope Finally Died: Originally released in 1993 by Candlelight, the album was only pressed once. Unavailable for several years, demand for the album made its original copies worth an estimated $150 on EBay. The ever-reliable Candlelight has since dug back into the vaults and is reissuing the album to coincide in part, with the minor doom boon that’s going on at the moment via My Dying Bride and Paradise Lost’s resurgence. However, Hope Finally Died is good enough to stand on its own two feet; a lovely snapshot of early 90s British death/doom.

Stylistically, Decomposed were far more “death” in 1993 than My Dying Bride and Paradise Lost were. In fact, some riff segments found across the album resemble Necroticism-era Carcass, a peg up on the extremity line that neither MDB or PL would reach. The British doom influence, however, is monstrous. The funeral march churn found on opener “Inscriptions” is as mournful as it is brutal, where upon typical song structure is discarded (a regular happening on all seven songs) in favor of extended instrumental breaks and in-and-out death metal barks. The aforementioned pure DM angle weaves its way through chunky sections on “Falling Apart” and the excellent “Procession,” the latter relishing in the sound and atmosphere of the time. (Read: The production job is also very much a snapshot of a reverb-happy, and bygone era.)

Decomposed would never follow up Hope Finally Died, perishing into obscurity for well over two decades. But metal usually does a pretty good job of unearthing past, unsung gems, this album in particular being of major interest given the recent surge in all things 90s-related. For those reasons (and the killer music), Hope Finally Died is one of the better reissues of the year. 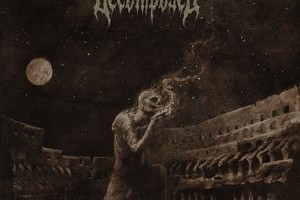